When my mother, 67, sat down to hem in the frayed ends of a handloom blanket, it took almost two hours for her arthritic fingers to cut off the extra threads gently and hem the ends in with near-perfect stitches. As she folded the blanket and placed it back in the cupboard, she said: “Handloom blankets are more comfortable than those useless (synthetic) ones. Why do you waste thousand of rupees for those you can’t even wash and reuse for long?” 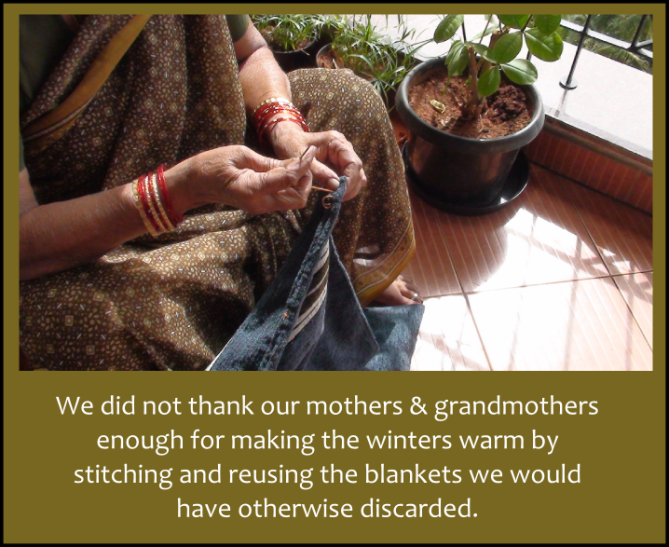 This is a woman, much like those of her and older generations, who grew up without using a single chemical (barring soaps) in her entire home. While baking soda and gram flour erased tough oily stains with ease, ash and rice husk washed dishes. She poured out soap water used for soaking clothes to wash courtyards and bathrooms. She took out her cloth bags whenever she went out shopping. She did not use fridge or water heaters. The only few plastic bags that she carefully preserved were meant to serve one precious purpose: waterproofing cloth bags during rains. Such has been the sanctity of her everyday routine that the waste her household generated hardly needed segregation. She recycled paper, utensils; found ingenious ways to reuse clothes by turning them into quilts, blankets and unknowingly let the local quilt-makers’ families survive on such local economy.

“They are not to be seen even in small towns anymore,” she regrets, and I know how deep that cut is.

She has lived so close to nature that she can tell the quality of soil just by the colour of it. She must have thanked Mother Earth each time her paddy fields blessed her with a bounty. She is not educated enough to understand what global warming is, let alone the ozone hole down to each damned detail. But she knows how to pooh-pooh the promoters of ‘non-stick’ cookware for she knows that her aged iron tawa has been giving her iron supplements and she will sure kiss it goodbye when it finally comes apart.

As my mother went ahead with her chores, I could not stop thinking that she must have executed a million such eco-friendly tasks to perfection but never got rewarded for it, not even a word of appreciation. Most of us who grew up watching our mothers rinse milk packets every morning and send them for recycling each month, agree that this highest order of eco-consciousness has been painfully silenced by the mind-numbing “eco-friendly” rhetoric the world over. That’s because they never separated being nature-friendly from being what they are. “Reduce, Reuse, Recycle” isn’t just a catchy phrase for them, but something without which life is impossible. They simply don’t know any other way of living. That’s how organically life has evolved for them, and in the process, they too.

For people like them, it is ludicrous to see modern-day environmentalists going about planting trees symbolically and hopping into their air-conditioned gas-guzzlers right after. They hold conferences in five-star hotels to discuss global warming issues where countless halogen lights and ACs spew out tons of carbon into the atmosphere. They set up committees, councils, and panels to put the same old wine in a new bottle and patent it and get awards for the same. They smoke, run ACs at full blast, and do pretty much everything that hurts the environment. Meanwhile, foreign eco-experts tell us how India can show the way for saving the planet by protecting its forest cover.

Yes, unless we turn everything into a spectacle, a fad, nothing works. Things have to come to such a pretty pass that some of us don’t even carry cloth bags unless they bear high-sounding statements.

The damage this planet has suffered isn’t just because we went reckless and misused scientific knowledge, but also because of our complete disregard to everything ‘old-fangled’. We did not heed those subtle messages. We wished it away without critical investigation. We did not thank our mothers and grandmothers enough for making the winters warm by stitching and reusing the blankets we might have otherwise discarded. We think we can do with tokenism what they did so painstakingly and relentlessly. We owe an apology to these women who have led such unacknowledged lives but never complained.

Can we call them “true eco-warriors”? If yes, then I am sure you have them in your home too.

It’s high time we celebrated them.