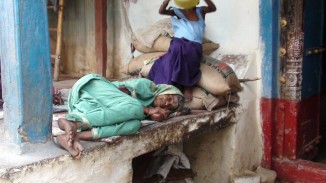 END_OF_DOCUMENT_TOKEN_TO_BE_REPLACED

The torrential rains battering Shimoga district have had parts of Hampi and surrounding towns and villages submerged. The Tungabhadra is in full flow. So is the suffering of the poor. It brought back the bitter memories of covering the 2009 North Karnataka floods. For those interested in reading first-hand field reports, here’s a series I wrote for ‘India Together’. 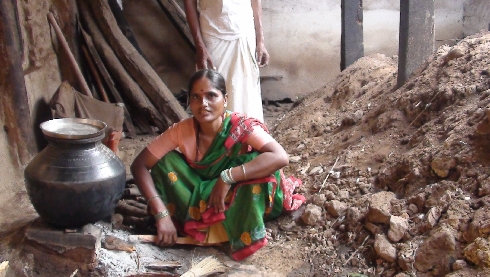 Cooking must go on even in this messed-up, roofless kitchen in Hiresindhogi of Koppal district.

This is exactly what some flood victims in Koppal district resorted to once they were distributed compensation for partially damaged houses—not because it was plenty, but too paltry to be put to good use. In the worst-hit Hachcholli of Bellary district, many poor people hit arrack shops or gambled away the relief fund. Paradoxically, amid its ruins stands a wine shop—all intact. END_OF_DOCUMENT_TOKEN_TO_BE_REPLACED

Flood-hit, hungry and homeless. These few words tell you enough to conjure up images of ravaged houses, damaged crops and huge crowds running behind trucks loaded with food packets, water bottles and blankets.

Massive floods hit North Karnataka in October 2009. Hundreds died and millions were rendered homeless overnight. A month after the tragedy, I visited some of the worst-hit villages in Koppal and Bellary districts in the Hyderabad-Karnataka region.

The afflicted were living in shoddy sheds put up on private land. Drinking water and food were a luxury. Government officials doled out two meals a day, while Dalits were condemned to leftovers. On some days, they simply went hungry. Mainstream media was no more interested in these incidents. Barring sporadic reports on corruption, “the worst tragedy of the century” (the state government termed it so!) was beginning to fade into the past.

At Hachholli in Bellary, the SC/ST colony was wiped out. The local officials had denied even a ham-handed survey to assess the damage. Pushed over the edge, the Dalit community talked to me for hours although they did not see any tangible outcome from this. They just needed someone to listen to their outpourings.

After packing up, I headed towards a tiny shop which had somehow withstood the disaster to buy biscuits for my one-and-a-half-year-old girl. As I was opening the packet, a little girl stood by me and stretched her hands out. Even before I gave a few biscuits to her, I saw some more children rushing towards us. Thinking that just one packet would not suffice, I bought more packets and started distributing. When I saw a little army of children running towards us, I spent a couple of hundred rupees and bought the entire stock.

A few seconds later, many young men and women and even elderly and crippled people came running and began snatching the biscuits from the children. The latter started crying and fought with all their might. It didn’t take long to realise that I had actually flagged off a tiny riot. I put my child down and ran to a young panchayat leader. Given the size – at least 450-500 people – it took quite a while before we could bring the crowd under control.

For the next few hours, I struggled to calm my shocked, angered and frustrated nerves. Harder was the realisation of how poverty, corruption and sheer callousness of the government had robbed these people of their basic human dignity.

When I told this to a journalist in Bangalore, she said my approach was “too urbane” and that I was “unmindful of the possible consequences”. Guilt-ridden, I let this criticism go down my throat without a protest. But somewhere deep in my heart, I asked myself: “Since when did buying biscuits for a hungry little girl become a crime?”

As much as it pains me to say this, this tragedy is nothing when compared with the catastrophic tsunami Japan is faced with. Deathly pall hangs over the entire nation. Yet, there is no breakdown of law and order. The people have more than had their share of hell and high water. Yet, dignity has not deserted the wounded souls. People silently queuing up before telephones to hear a familiar voice from the other end is heart-rending. Maybe, it comes from their firm belief in the fact that they have put behind a worse man-made cataclysm. Maybe, it is their firm belief in the kind of system they have built, their faith in governance. They know that they will move on as they did decades ago. They know that they will face it with determination although it is hard to define it at this moment.

Isn’t there a lot to learn from them for a country obsessed with building malls and flyovers?