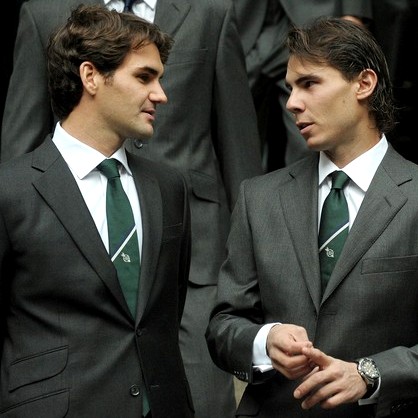 Had you been up at 1.30 am local time and warmed up yourself with the pre-match euphoria that gave a 50-50 chance to the greatest tennis rivals, you would have just empathised with Roger double-faulting at the opening point  of the match.

Nerves. That’s what it was.

But that’s the only tense moment Roger had to put himself through in his neatly packed-and-delivered 61-minute blockbuster performance at the ATP World Tour finals.

Given the way he won both Basel and Paris, Federer’s win wouldn’t have surprised even the staunchest of Nadal fans. But what made this match stand out was how easily he put away Nadal and how vulnerable his nemesis looked right from the word go.

If you look at closely despite the bagel served out by Roger (6-3, 6-0), this match clearly betrayed it was as much to do with Nadal’s slowdown as it was with resurgent Roger’s year-end flourish. At times, I wondered whether it was the same Nadal I was watching—the ominous player who steps into the court with infinite amount of energy and speed.

We all love the rivalry and wish it go on forever. However, Nadal’s topspin (agreed, it is not as stingy as it can be on clay court) is not wreaking havoc on Roger or any other player he has faced in the recent past. Nor are the long rallies as intimidating as they used to be till recently—Nadal’s best weapon that leaves his opponents in tatters.

Now, the question is, will the rivalry last that longer as we would have predicted it just yesterday? The more he loses those long rallies, the fewer will be his victories!