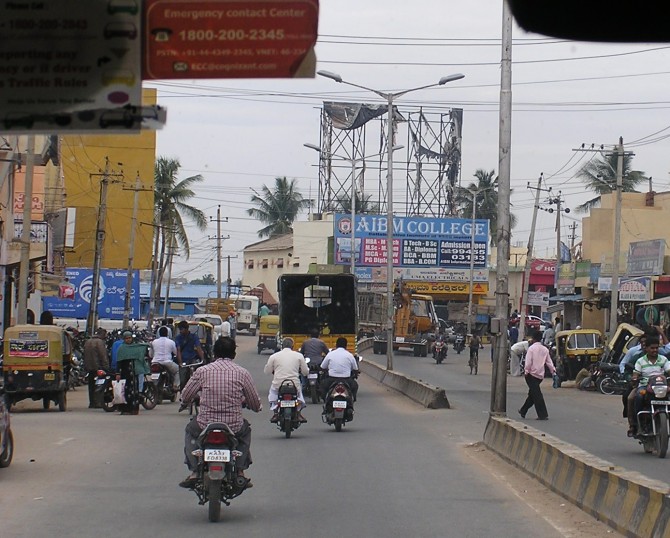 After reading the previous post on Kolar, so many people want to know the WHATs and HOWs that went into transforming it into a truly and holistically clean city by its City Municipal Council authorities.

It’s holistic because it just doesn’t put all the waste into one bin and send it for landfilling. It does not believe in apparent cleanliness by focusing on only clean roads but deals with each stream separately in the best possible manner. All this achieved despite limited financial resources and humanpower.

As Assistant Engineer Kotreshappa Benni and Health Inspector K G Ramesh took the Solid Waste Management Round Table team around in the city, the officials’ passionate explanation laid bare this much for sure: The district administration banks not on some inanimate machinery, foreign technology or expertise. It banks on its backbone: The pourakarmikas and their supervisors.

According to Kotreshappa, Kolar, Dandeli and Haliyal are the only three local bodies out of the 215 in Karnataka that live independent of landfills. So how did all this evolve so organically? What explains the functional relation between parts and the whole? What did they get right that BBMP hasn’t?

We got off our van at a point where we saw some PKs in action. Please note that the officials did not take us to some predetermined spot of their choice. All of us got hooked to Kotreshappa’s explanation on every aspect of waste collection.

PK Muniyappa is getting ready with his weighing scale.

Time to tip it into a bigger bin.

The PKs sort dry waste into three-four categories at the spot.

Fallen dry leaves are scooped up from the roadsides while on the move.

Segregated kitchen waste bins are placed at a collection point.

All set and waiting for a truck to pick up the bins to be taken to a composting yard.

Why do PKs weigh their waste?

Each PK is under strict supervision by a supervisor or route manager who monitors the level of compliance on each street or road. He checks the weight and sees if it is lower than the average quantity. If it is low, that means segregation is suffering in that street. He talks to the PKs concerned and tries to fix the problem.

All these statistics are computed at the corporation office every day by the route managers. This kind of systematic waste audit not only helps with monitoring, but also gives a lot of insights into various other aspects of municipal waste management.

A total of 10 route managers are under the health inspector’s hawk-eyed vigil. Any road with litter comes under scrutiny, so do their route managers. The inspector does regular beats, especially the problem areas.

Humanpower and machinery at work

Total number of health inspectors: One.

Total number of pourakarmikas at work: 150.

The waste generated by 1,50,000 people is collected, sorted, part of it sold to recyclers and wet waste is sent for composting in just five hours!

The result of the efficiently designed system is this: Only 150 pourakarmikas are enough to handle the waste generated by 150,000 people. In other words, 1:1,000. It signifies not just the commitment of the PKs on the move, but the value of segregation at source.

The PKs don’t have to sort the mixed waste dripping with leachate. They don’t have to touch hazardous medical waste to pick out (by now contaminated) kitchen waste. They don’t have to curse themselves for doing this work. Just by putting our waste into three separate categories at home, the Kolar people have shown how to make the lives of millions of others so much more livable.

So no matter how much we beat around the bush, it comes back to the same fundamental responsibility: Segregation at source.

One thought on “Swachh Kolar 2: One pourakarmika for 1,000 people, yet city-wide waste collection is over in 5 hours”