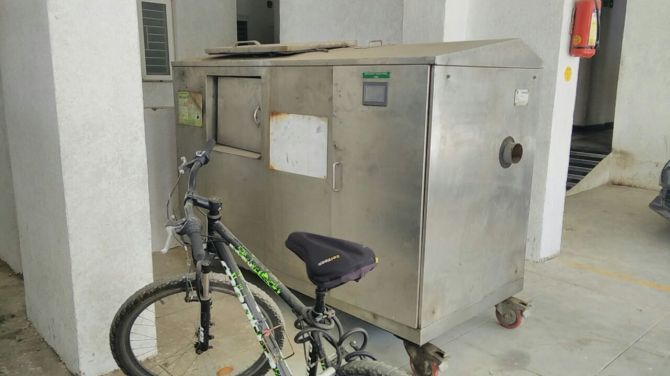 A simple human error resulted in this machine catching fire and damaging the roof of DSR Woodwinds apartment’s compost room six months ago. It seems beyond repair now and has been dumped in the parking lot. (Pics: SH)

This is an incident that unfolded at DSR Woodwinds apartment, Sarjapur Road. An automatic 24-hour machine given by the builder to compost kitchen waste caught fire when a staff member mistakenly switched on the machine after sundown. Within hours, the machine was spewing out flames and the roof got damaged. The smoke spread. The staff somehow managed to sneak into the compost room and put out the fire. Since then the machine, which comes loaded with promises of turning precious green waste into valuable compost, has been gathering dust in the community’s parking lot. (For more technical details on these machines, please read this post.)

It’s hard to say how many of these glorified incinerators have been deployed by their makers to turn our city green. But they are by no means a rare feature in Bangalore anymore. The irony is this is the same city rewarded with activists whose penchant for things green has contributed significantly to the national discourse revolving around waste segregation and in-house composting. 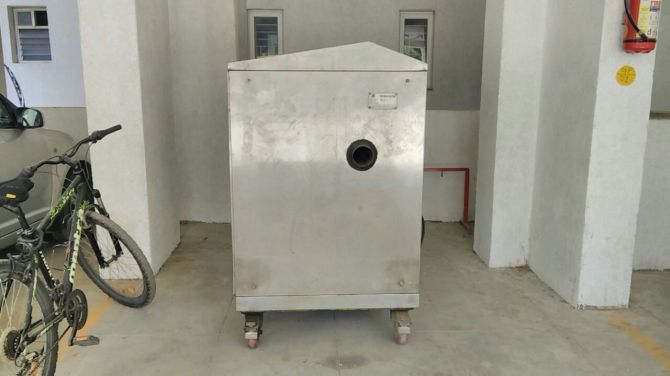 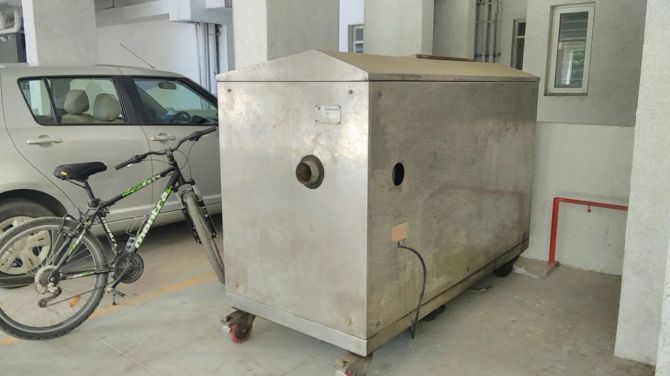 The staff took me to a parking lot where the machine has been dumped and the story began to unravel rather insidiously. The machine had many of its features like touch-screen panel lost to the fire. The remainder was a steel-walled box with dark interiors. It had met its end but still, there were tales to tell.

Rajesh Iyer, software engineer at Intuit and president of DSR Woodwinds Resident Association which has been championining green initiatives, says, “The machine was given by the builder in 2013 which apparently cost them over Rs 8 lakhs. We are a 256-strong community and generate around 150-180 kgs of kitchen waste each day. This machine was of small capacity and took three days to process around 180 kgs. We used it only for three days and the smell became unbearable. The security booth located adjacent to the compost room couldn’t bear the smell and the staff complained of constant headaches. So we put it aside and started sending away our segregated waste through BBMP.” 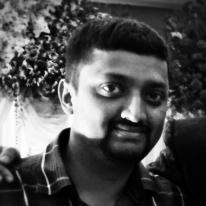 “We obviously did not use the ‘compost’ from the machine. It was lying idle for years. Some six months ago, we talked to the builder to take back the machine.”

Since it had gotten rusty in many spots, the company executives were called in to fix it. However, it still had some dried-up waste inside. “The control switch of this machine is inside the security room and one guard turned it on by mistake. Since there was no moisture, it caught fire. We saw smoke and fumes coming out of the roof in the morning. We had a tough time handling the situation,” adds Rajesh.

Supervisor N Prakash adds, “The smoke and stink spread all around.”

The association decided to dump it in a corner and started researching on sustainable composting methods. Rajesh says that the community did think it through and decided to be “a solution to the problem rather than keep adding to the existing ones.” “The machine consumes a lot of power which goes against the very spirit of managing one’s own waste responsibly. Secondly, we didn’t have good inputs on the (instant) ‘compost’ from anywhere. To add to it, the machine fell short of our demand. We thought of spending our money on a method that doesn’t harm the environment even though it called for some manual labour.”

They finally zeroed in on Shudh-Labh digesters and have taken out three batches of perfectly curated compost. A leaf composter from the same vendor takes care of the community’s garden rejects. 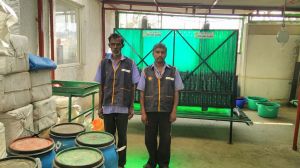 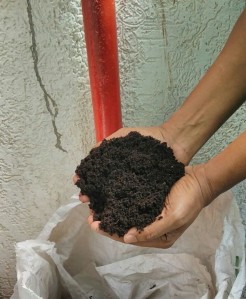 Black gold, as good as it gets. 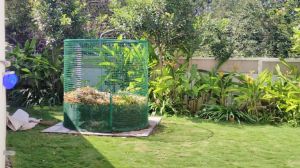 This leaf composter from Shudh-Labh takes care of garden waste.

Effect on the soil

More insights unspooled when Facility Manager Malakonda Rao, appointed at DSR Woodwinds six months ago, chimed in. He worked previously at an apartment in BTM Layout where a similar machine was in operation. Rao vividly recalls the horrible effect of using ‘the instant compost’ for gardening there. “The ‘compost’ turns cakey and develops a white top layer within days. It tends to stay on and doesn’t get processed.”

“Quite the contrary, the compost we are using now can be used for any plants and even lawns and it begins to work well with the soil. No need to add more soil to the compost. We can use it directly. There is no smell or flies.” 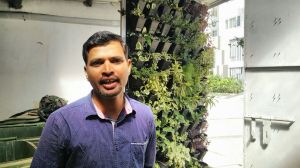 A point to be noted here is the suggestion usually given by the machine makers. They say that their ‘compost works well when it is mixed with soil at 1:10 ratio. If 100s of kgs of compost is brought out each month, adding tonnes of soil to the garden is not a task you want on your hands. Moreover, a large chunk of landscaped area in such communities is generally set aside for lawns. They simply can’t take in so much of soil and process it. This exercise is not just futile. The cost incurred will be quite high and moreover, you will not know where to dump it eventually. In all likelihood, customers will simply burn the green waste with the power meter running at full throttle and send it to landfilling.

Bad smell, skin allergies and what not

Apart from the headache issues reported by the staff at Woodwinds, Malakonda Rao also spoke about how difficult it got to retain the staff at his previous workplace. “The composting staff kept quitting. They used to get skin allergies often and complained of too much of smoke and burning smell.”

“On the contrary here, the current composting method attracts no flies, doesn’t give out bad odour and looks natural. All ingredients eventually degrade.”

Supervisor N Prakash shares Rao’s views on this. “Although the current method does involve some work, we are at least sure of the output.”

Simple human errors can get dangerous 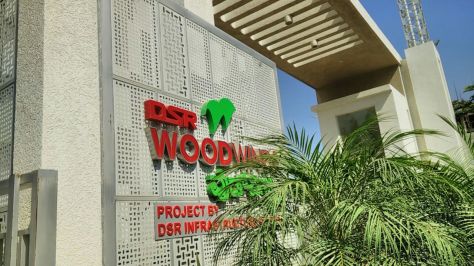 Going by the way the fire accident happened, there is still room to assume that it was not a manufacturing defect and the mistake was committed at the customer’s end. But if this machine doesn’t have an inbuilt mechanism to get a fire alarm going or even a simple thermostat to stop overheating, then leaving such machines at the mercy of the staff makes it appear stupid. Staff keeps quitting and responsibilities keep shifting. The best designs are those that factor in such human errors and firewall them. That’s simply not the case here.

Source segregation goes for a toss

A point to note: Since everything gets burnt inside these machines and the end product looks the same no matter what went in, the pressure to segregate the waste at source plummets. That’s why Rao specifically mentioned the “melting of plastic and the burning smell” spreading all over the complex. “It never smells normal, natural.”

Imagine the plight of the workers exposed to such hazardous work conditions? Dioxins and furans are some of the most complex and cancer-causing chemical compounds which get released into the air when plastic is burned at temperatures below 1000 deg C. But still, since when did workers’ rights to healthy working conditions topped the decision-makers’ agenda than the ease of making mounds of unwanted waste disappear instantly?

If science and customer experience tells us anything, it’s this: This entire concept of instant composting is downright outrageous. It’s just beyond belief that builders and educated customers fall for the vendors’ claims so easily despite their flimsy and dubious hypothesis. The absence of stringent measures and legislation of any nature lets these firms grow wings overnight. What’s at stake here is our own living environment. Hence, the decision-making process demands a little more than our natural quota of ordinary suspicion against such preposterous claims, and caginess before investing hugely in such machines. After all, we are not buying an instant coffee maker here!

But experience tells me that all of the above necessary ingredients needed to make informed decisions evaporate instantly when someone lays out colourful brochures before us and tells us what we just want to hear.