“Avarige protective gear kodsi, Swamy… Can you look at the filth they are standing in? There’s lead and mercury in the sludge. They will get all kinds of diseases. Can’t you just get them boots and gloves?”

I heard N S Ramakanth (NSR)—a Bangalore-based environmental activist—say this to a mid-ranking BBMP official on Gandhi Jayanthi evening at Sankey Tank. A never-seen-before, massive clean-up operation was into its fifth day to save whatever that was left of this beautiful water body post Ganesha festival. “Don’t say that, saar! They will stop working,” the official replied.

That the official was working till 6 pm had a lot to do with the pressure NSR had exerted on the upper echelons of Bangalore’s bureaucracy. As always, NSR was chasing scores of officials to finish the clean-up quickly to stem the seepage of the heavily polluted, poisonous sludge into the relatively clearer waters of the tank. Preceded by thorough planning and equally efficient execution, it was for the 16th day that NSR was overseeing operations, including the first 11 days of festivities when immersion went on almost every day resulting in hundreds of thousands of footfalls to Sankey Tank. 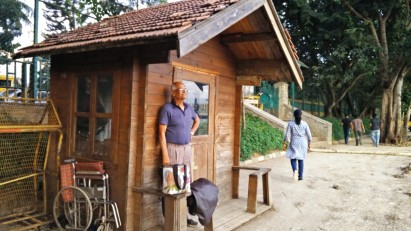 N S Ramakanth overseeing the post-Ganesha festival clean-up operations at Sankey Tank. Gandhi Jayanthi was the 16th day since the festivities began. He has been working for hours on end instructing the civic officials to keep the work going to minimise pollution to the tank waters.

For those of you who don’t know NSR, here’s a short intro: He is a 77-year-old seasoned activist and the senior-most member of Solid Waste Management Round Table. His battle against garbage is an epic of its own class. For years now, there has hardly been a day in which he has not interacted with bureaucrats to solve, not just mitigate, the garbage problem or motivated volunteers or delivered talks to launch segregation, composting or similar sustainable initiatives in just any part of the city. If Bangalore is the only city in India where discussion on garbage once reached a crescendo, if the campaign turned into a crusade and if the hope of a landfill-free city took shape howsoever vaguely, there has always been this relentless activist who has never lost an instant to raise his sane voice to further the cause. If NSR makes himself heard and his word honoured in various spheres of Bangalore’s bureaucracy, it simply reveals the extent of his commitment, the depth of his involvement and the reach of his ability to work with the officials and get things done at once. Simply put, he has stopped at nothing to drag a reluctant civic authority, a reluctant government or a reluctant anybody towards a cure. Those of us who know him personally can say for sure that he will work with the same intensity until the whole malignant edifice comes crashing down like a set of dominoes. That’s because his belief in a landfill-free city is an unshakeable one. He is a phenomenon. Unlike any other.

By October 2, the Kalyani, a small step-well where immersion goes on every year, had been relieved of all the idols. NSR had made sure that truckloads of them were kept for display for two days around the Kalyani to make people open their eyes and see for themselves what a tragedy this festival turns into each year, unfailingly.

The highly polluted remains in the kalyani were being pumped out into a nearby drain. It was a thick, black sludge being bucketed out by 12-15 BBMP workers manually. “There’s no other alternative. All the sewage is supposed to be routed to an STP. But even then, it won’t treat mercury and lead. And that’s something we have no solution for right now.”

Even as our conversation went on unravelling his messianic spirit and ever-manic pursuit to find solution to every problem, hordes of people were going about their evening walk as usual. There was some stink in the air forcing them to cover their nose with a kerchief.

“It’s way better this year. We sent all the flowers and leaf rejects to composting. What you see is only the rotting idols. Last year, the stink was horrible. People living in the surrounding areas couldn’t sleep or step out of their houses. To prevent this, we made sure that segregation of all the biodegradable waste took place right here and sent for composting immediately.” 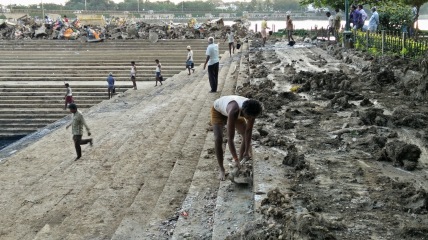 Four trucks and two JCBs had been pressed into service. Over the fortnight, with the help of volunteers, NSR had sent six auto tipper loads of flowers and tulsi garlands for composting to a nearby facility run by Hasiru Dala. Three five-tonner tippers carried at least 10 tonnes of plantain leaves and stems and mango leaves for composting. Between 5.30 am and 6 pm on last Sunday, 21 truckloads of rotting and stinking idols were sent to abandoned quarries in Mallasandra.

Look at the situations we create that promote landfilling!

Right now, what tops NSR’s agenda is to bust the myth of Kalyanis all over Bangalore. Explaining how we are made to believe that these Kalyanis have a nonporous or water-proofed bottom to prevent seepage of the polluted sludge, NSR spoke about the water level in the tank that kept going up and down based on the extent of rotting idols taken out on that day. “I oversee operations for at least 5-6 hours every day. I can show you many spots from where a free flow of water (or sludge in this case) happens. I have invited the Lake Watchdog Committee tomorrow to collect samples from various spots in the water body and get them tested for pollution. That’s the only way to confirm the extent of damage caused by our irresponsible acts.”

The man with a mike

NSR’s meticulous detailing of the number of idols immersed in the Kalyani and the break-up of clay and PoP idols.

If you are one of those who visited this spot for immersion, you must have come across NSR with a mike streamlining the activities on all 11 days. And that included galvanising a 250-strong police force into action, ensuring segregation by BBMP staff and volunteers. Interestingly, he even convinced people to take oath that they would go for only clay Ganeshas from next year. In fact, he didn’t even spare the priests and made them take oath that they would not perform pooja for PoP (plaster of Paris) idols!

Even as he went about these on-the-spot, instant oath-taking ceremonies, several little children got lost in the crowd and chaos erupted when panicky parents rushed to the man with a mike.

“I don’t understand why people have to come from Vijayanagar and other areas for immersion here. Some children got lost in the crowd and it took hours to ensure that they reunited with their parents later in the night. It was so painful to see the parents running all around looking for their children. Why all this? Why can’t we think of celebrating the festival in sensible ways?”

The sun had almost set against the quiet waters at Sankey. People had begun to walk back home. NSR dished out a sheet in which he had meticulously noted down the number of idols immersed over 11 days. In all, 1,28,620 idols went into the Kalyani. Of which, 61,620 were made of clay and the rest (67,000) were PoP idols. “I just wanted to see if the awareness campaigns have made any impact on the people. Not bad! Almost 50 per cent of them were clay idols this year.”

It didn’t stop there. “I have been pressuring the authorities to simply ban PoPs as it was done in West Bengal. Now, during Durga festival, you get to see only clay idols. I have asked the Pollution Control Board to put up the names of potters who make larger clay Ganeshas on its website. I hope people make use of them.”

What hurts NSR the most is the huge amount of public money being spent on cleaning up the mess left behind by devotees. “I really want to know the number. It’s not a small number. I know at least that much.”

A bridge between hope and despair

As the 16th day of struggle drew to a close, it was time for the workers to wash their tired and sludge-laden bodies and head home.

The scene at Sankey, our conversation and the callous society which doesn’t honour his presence but will certainly feel his absence some day, had me returning home with a mingled sense of pain and relief. It was strange. Strange because at times NSR looked like a boat with mast but no sail. It felt as if he had gotten himself into a seemingly never-ending war. It felt as if he was drifting alone in a rough, uncharted sea.

But at the same time, it was difficult not to see a glint of hope in his eyes when he said the number of clay idols had risen significantly.

I have heard that hope settles snugly in nooks and corners. And for once, it was very clear where it had found home. 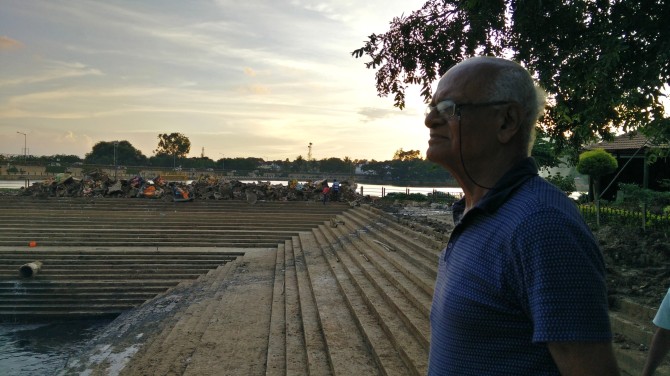 8 thoughts on “How N S Ramakanth, a noble soul, is trying to save Sankey Tank”