Solid Waste Management Round Table’s SwachaGraha Compost Connect (SGCC) campaign was officially kicked off today with two farmers picking up a tractor-load of kitchen waste compost from Sobha Althea-Azalea, Yelahanka, Bengaluru. There are still many more heaps of compost to be loaded up. 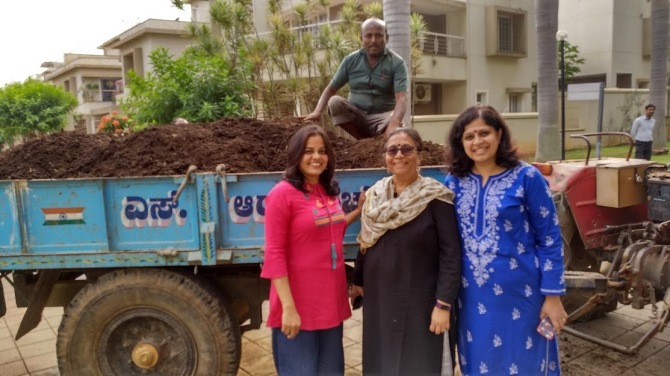 The campaign is a humble initiative by SWMRT launched recently to connect urban compost producers with rural farmers located on the outskirts of the city. In less than two weeks since the launch, around 15 farmers have shown interest in buying compost from apartments, whereas more than 20 apartments have come forward to sell excess compost piled up in their communities.

“We have made a difference!”

Krishna Kannan, who heads green initiatives in the apartment, says: “I just felt thrilled! Somewhere some farmer has decided to turn organic and we have made a difference, albeit in a small way, but we did! To see the tractor loaded with black gold leaving our campus was thrilling too as I know it will make the soil richer and make the farmer realise that he could have a good harvest without using chemicals. We gave back to the Mother Earth what we got from Her.”

Chimes in Savita Ayyar, also a green volunteer: “With the rapid growth of our cities, India’s farmlands are under pressure. There is increased demand for food supplies and this in turn requires a sustainable approach that respects all resources. In this context, it is wonderful to see an effort being made to channel excess compost from Bangalore’s building complexes to local farms. At Sobha Althea and Azalea, we have invested considerable effort over the last several years in waste segregation and composting of wet waste and garden waste.”

Thanking the SGCC campaign, she adds: “Some of our excess compost has now made its way to a farm in Harohalli. This is a matter of pride for us in the community and reflects concerted work both on the part of residents and the local Government. No doubt a win-win for both our cities and for our farms!”

A tractor loaded with nice-smelling compost, faces lit up with smiles. With this, the community’s own SWM campaign has come a full circle. Waste management began here in this 202-home community in October 2012 when a BBMP legislation made it mandatory for bulk generators to process their wet waste in situ. After humongous efforts, trial and errors, to witness heaps of unwanted kitchen and garden waste turned into priceless compost was something no one had foreseen.

It’s been a journey for all: Sincere segregators of the community, volunteers who monitor composting activities and of course, the staff members who actually get their hands dirty each day.

If your community also has excess compost, please write to endlesslygreen360@gmail.com. For more details, please read this post.

5 thoughts on “SwachaGraha Compost Connect kicked off, biomass sent back to the soil”