No words can describe how evolved Papamma’s communion with nature is. A futuristic thinker who battled threat to food security and has been a guiding light for hundreds of her villagers.

Far from being browbeaten by poverty, illiteracy and caste bias, this Dalit woman living in D Kurubarahalli in Mulbagal taluk of Kolar district has spawned a green revolution by changing the mindsets of many of her villagers who were reluctant to dig the earth and sow a seed.

A born native seed-collector, Papamma works hard to preserve a variety of seeds and distributes it among her villagers. Her love for farming is so deep that her bountiful kitchen garden and a few acres of land have inspired many of her villagers to take up organic farming. Thanks to her, you can see kitchen gardens sprouting in her water-starved village. And food security, a meaningful pursuit. 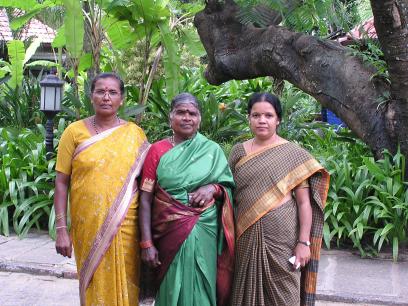 Papamma with her friends who are also organic farmers.

She is an asset to her community and NGOs who bank on her knowledge and people skills. A community seed bank set up in association with Green Foundation began with 15 seed varieties contributed by her.

Perhaps, this is the most beautiful thing about anything to do with soil. It needs no formal education to sow a seed. And that is what gives the confidence that our future food security is safe and it is in good hands.

It was a memorable moment to meet this woman when she came to receive the “IGBC Green Champion” award in Bengaluru a couple of years ago. So down-to-earth that she was too shy to sit on the dais with other award recipients.

I guess that’s because humility comes naturally to those who work with soil.